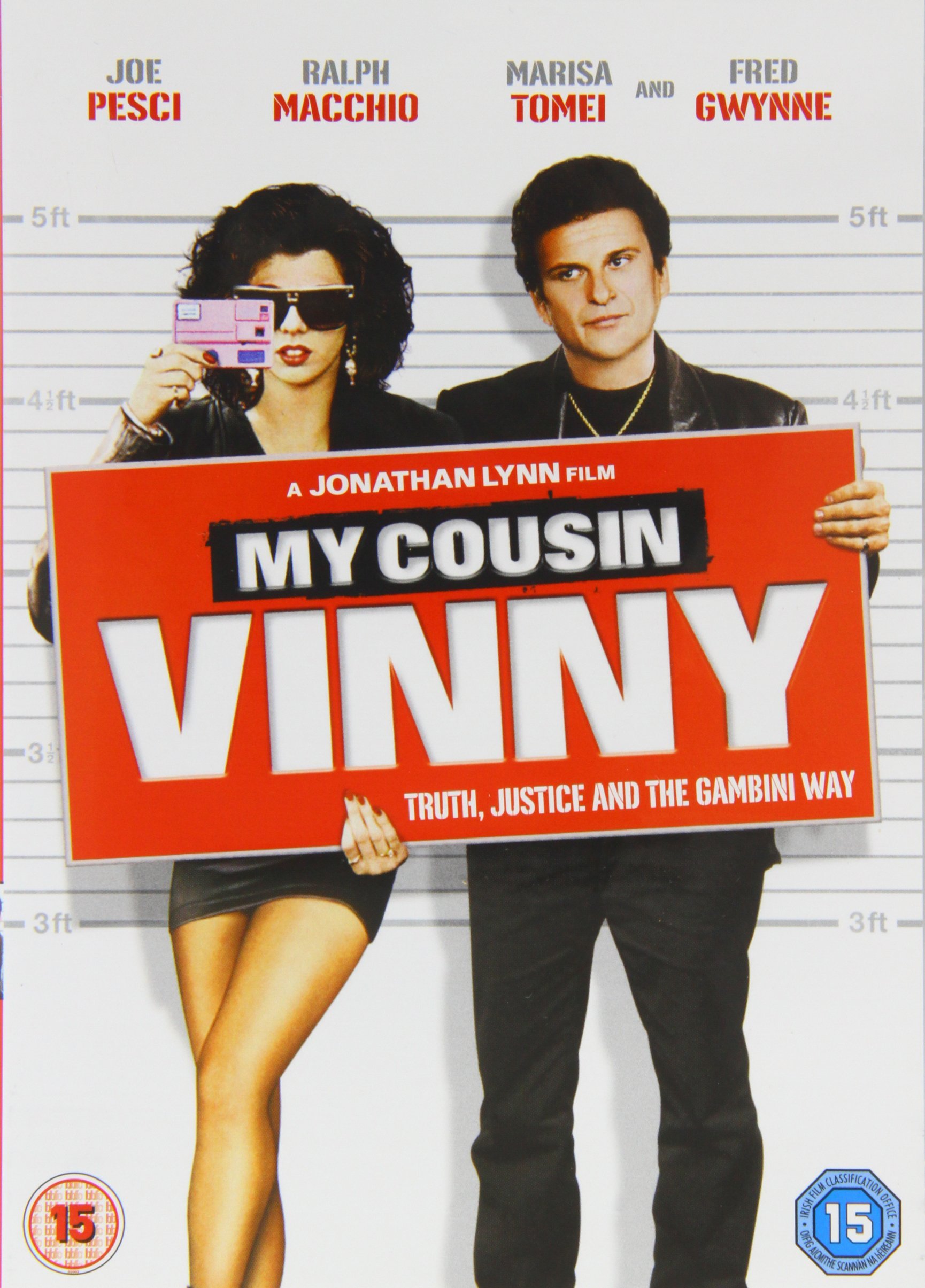 DVD Special Features: Audio Commentary by director Jonathan Lynn 2 Theatrical Trailers Scene Access Interactive Menus English surround sound 2.0 Subtitles: Croatian, Czech, Danish, Finnish, Hebrew, Hungarian, Icelandic, Norwegian, Polish, Portuguese, Swedish, Turkish, English for the hearing impaired. 1.85:1 Aspect ratio 16:9 widescreen version From .co.uk ----------- 1992's My Cousin Vinny is a delightful comedy-cum-courtroom drama set in Alabama. Joe Pesci stars as Vinny, the garage mechanic recently turned lawyer, who finds himself straight in at the deep end when his young cousin is unjustly arrested, along with his buddy, for the murder of a store clerk. From the opening scenes in which the hapless arrestees labour under the impression they've been booked for stealing a can of tuna, My Cousin Vinny's comedic pace never slackens, even as the drama builds. Much of the fun derives from raw, Brooklyn native Vinny's coping with the cultural backwaters of the Deep South, from its lardy grits to the 5.30 am "alarm call" of the factory horn. There's a good running gag involving retrieving $200 from a recalcitrant local redneck, while his clashes with the court judge, played by the late Fred Gwynne are priceless. Pesci goads this stickler for procedures by mumbling expletives in court, turning up in a leather jacket, then a mauve frock coat and arousing the judge's suspicions as to his bona fides. However, it's Marisa Tomei who surprisingly, but justly, took an Academy Award for her performance as tomboyish Lisa, Vinny's girlfriend. Tart rather than tarty, she more than matches Pesci for Noo Yoik sass and mechanical knowledge, delivering a court lecture on limited slip differential and independent rear suspension that oozes improbable sexiness. On the DVD: a decent presentation in 1.85:1 aspect ratio, though it's only Tomei's bizarrely eye-catching costumes which especially merit DVD enhancement. There's also a commentary by director (and co-creator of Yes Minister) Jonathan Lynn, in which--though at times seeming to struggle for interesting things to say--he reminisces on the fear in shooting the film's prison scenes adjacent to Death Row in a maximum security prison. --David Stubbs P.when('A').execute(function(A) { A.on('a:expander:toggle_description:toggle:collapse', function(data) { window.scroll(0, data.expander.$expander[0].offsetTop-100); }); }); From the Back Cover ------------------- In this must-see comedy Hit, two carefree pals travelling through Alabama are mistakenly arrested and charged with murder. Fortunately, one of them has a lawyer friend in the family--Vincent Gambini (Joe Pesci), a former auto mechanic from Brooklyn who has never been in court--or in Alabama. When cousin Vinny arrives with leather-clad girlfriend (Marisa Tomei in her Oscar winning supporting Actress performance) to handle his first case, it's a real shock--for him and the Deep South! See more ( javascript:void(0) )
Show More
Reviews

Disclaimer: The price shown above includes all applicable taxes and fees. The information provided above is for reference purposes only. Products may go out of stock and delivery estimates may change at any time. Desertcart does not validate any claims made in the product descriptions above. For additional information, please contact the manufacturer or desertcart customer service. While desertcart makes reasonable efforts to only show products available in your country, some items may be cancelled if they are prohibited for import in South Korea. For more details, please visit our Support Page.